Liveurope is an initiative supporting concert venues in their efforts to promote up-and-coming European artists.

The platform works as a quality label awarded to live music venues committing to European diversity. The objective of Liveurope is to boost the programming of young European acts across the continent and help them reach new audiences. Established in 2014, the Liveurope platform is the first initiative of its kind in Europe.

Who are the Liveurope members?

Liveurope is a membership organisation, bringing together international concert venues across Europe. The platform is coordinated by Ancienne Belgique, the internationally acclaimed concert venue located in the heart of Europe: Brussels. The member venues are selected for their dedication to booking European talent, as well as their professional infrastructure and international reputation.

Liveurope provides support in the form of a financial bonus to the member venues proportionally to their booking of emerging, non-national, European acts. The function of this mechanism is to give established concert venues the opportunity to programme emerging artists every year.

The venues, in turn, are completely autonomous in their choice of programming and booking artists, as long as these acts are both emerging and European.

What’s an ‘emerging artist’ in this context?

In order to be considered as a ‘Liveurope supported’ performance, the artists need to have fulfilled a number of criteria. Firstly, the artists must be based on the European continent, must have proven a dedication and aspiration for an international music career, but may not have been professionally active for over 5 years.

How is the platform organised?

The Liveurope platform is coordinated by Ancienne Belgique, and it is supervised by a "Steering Committee", composed of 3 platform members, which role is to monitor the activities carried out by the members.

In the future, the Liveurope platform aims to expand to include more concert halls across Europe, and become the defining quality label for European concert venues.

The aim of the Creative Europe programme of the European Union is to support European cultural, creative, and audio-visual sectors. Liveurope, being one of the first initiatives co-financed by this programme, has the responsibility of bringing new artists and music to new audiences across European borders, supporting emerging musicians in their artistic career.

Above 55° is a music project supported by the Nordic Culture Fund in the scope of the Puls initiative. It is dedicated to increasing the visibility and booking opportunities of up-and-coming Nordic talent, hand-picked by Liveurope’s three Nordic venues: Blå, Debaser and Vega. 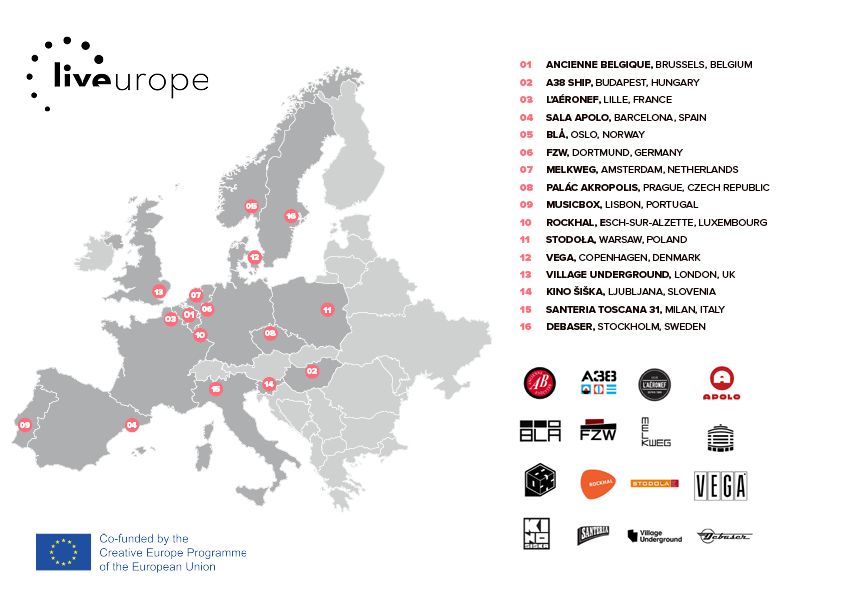