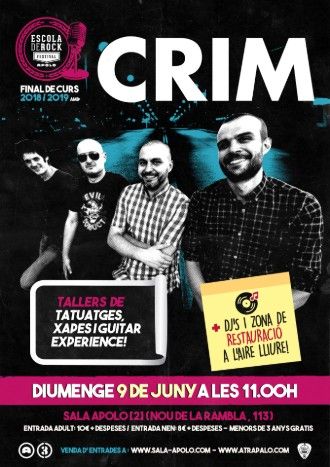 The Escola de Rock Apolo Festival of the month of February will be dedicated to national rock classics. From Barcelona,   Mala Vida band will play the best songs and the greatest hits of Spanish rock music of the last 40 years. A repertoire with versions of Barricada, Extremoduro or Los Suaves, among many others, which will make the nuggets of the youngers and also the olders in an interactive show where everyone who comes to the concert will be the protagonist. The students of the EMAC Music School will open the party.

In this edition we will have workshops of:
- Tattoos
- Makeup
- Veneers
- Cardboard Guitars

We have outdoor area with restoration.

Escola de Rock is a big plan for the family where children discover the music that moved their parents... and the adults recover the innocence of when they felt the crush of pop or rock for the first time.